The series, based on the «Archie» comics series, will get a sixth season before the end of 2021 year. What «The CW» channel prepare in new episodes of popular teen drama, watch on this page.

Release date of the «Riverdale» TV series 6th season officialy set to the November 2021. Shooting process will start at the end of spring at the Canadian city Vancouver. Delay was caused by COVID-19 pandemia.

This teen drama deservedly become one of the most anticipated shows at The CW. TV series made by Roberto Aguirre-Sacasa tells about life in a small province – Riverdale, which, despite its tiny size, has a lot of mysteries. Deal with them have the main character – the local school student Archie Andrews.

Events of TV series begins from tragic death of Jason Blossom, who was the best friend of Archie. It totally changes the life of the Andrews in this academic year, he has become a new person. The guy goes against his father will and decides to start a musician carrier, however, as most of his fellows.

The main character is the soul of the company and the owner of attractive appearance, so, for his heart is fighting several girls at the same time: Betty Cooper, which is secretly in love with Archie for a long time, the new girl Veronica Lodge from New York and Cheryl Blossom, the most popular girl in school, twin sister of ex-best friend Jason, who tragically died. Also, guy have many buddies – among them writer novice Jughead Jones from Archie class, singer Josie McCoy, etc. However, all of them should solve the mystery of the death of Blossom and simultaneously open new secrets that are hidden behind the thin walls of the province…

One year later, the mystery of the death of the best friend of the main character is not revealed. But it does not stop Archie Andrews and his fellows, who continue their education in high school. Fred wants his son to follow his father’s footsteps and began construction business, instead of making music. Veronica becomes the main girl of Andrews, which greatly saddens Betty and Cheryl. Jughead investigation brings unexpected facts to show.

Shooting of «Riverdale» series began with the traditional making of pilot episode, that channel The CW was create just in two weeks: from March 14 to April 1, 2015.

Later, after the approval of the project management from the cable network, the creation of the remaining 12 episodes have continued one and a half years – from September 7, 2015. Plot of teen drama based on the same name book series, established in Vancouver. The final episode of the first season was filmed before the premiere, in early 2017.

The selection of actors for the leading roles in the TV series treated with high painstaking – this is not the first attempt to film the comics, so characters will be compared with performers predecessors. 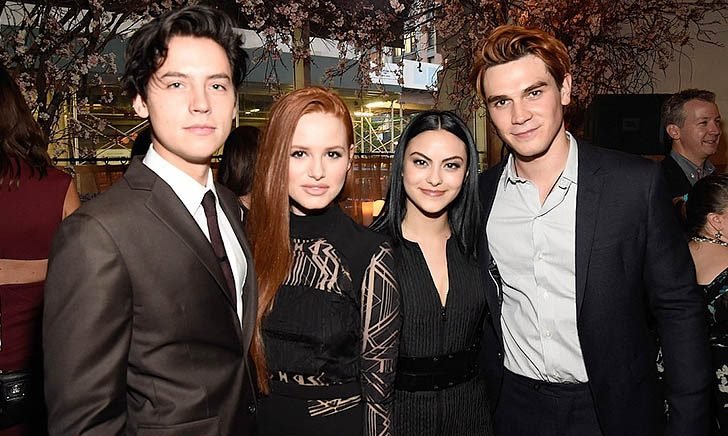 Pilot episode was showed for journalists before world premiere, at January 2017. The IGN site gain 8.5 points from 10 possible. Others present at the pre-show critics are praise creators of the show. After world premiere, at January 26, Metacritic rating mark episode named “Chapter One: The River’s Edge” with 7.2/10. At the evening The CW gain only 1.37 million viewers (among adults 18-49), that is bad.